How Our Coffee Adventure Began 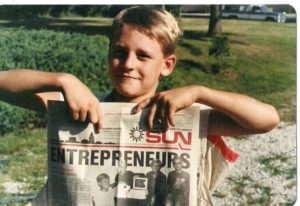 We had a dream of starting our own business.  My husband, Lance, started dreaming about entrprenuership when he was a boy (that’s him above) and has files full of business plans that he began writing in high school.  We talked about it when we dated.  When our first son was born I quit a job I loved to come home so that we could start our first business.  But it was two long years after taking the leap when the adventure started for us.

Lance was in a local coffee shop and asked the owner about his coffee roaster.  His response, “We haven’t used it in years.  Frankly I’d pay somebody to get this thing out of here.”  Within the week we had a friend who came and helped us move it into another friend’s garage (thanks Jeff @colorsalonandspa)!

This thing was huge-picture two refrigerators and a deep freeze.  We had a small house-where were we going to put it?  What are we going to do with it?  The previous owner gladly got rid of it because the flue caught on fire and it scared them.  Soon after Lance had a customer at his day job who shared his story about roasting coffee from his home.  It was during this conversation that we realized that we had been given a piece of equipment worth @ $10,000.  Yes, GIVEN to us.  After years of waiting and dreaming our adventure of starting our own business officially began.

Want to join the discussion?
Feel free to contribute!

HOW TO MAKE A LONDON FOG (EARL GREY TEA LATTE)

More Than Words
Scroll to top